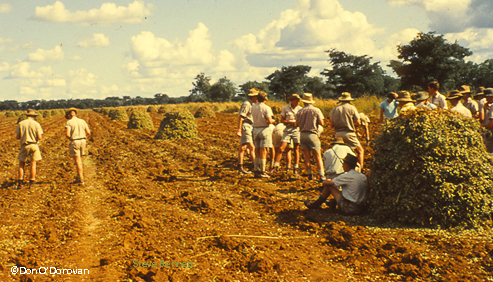 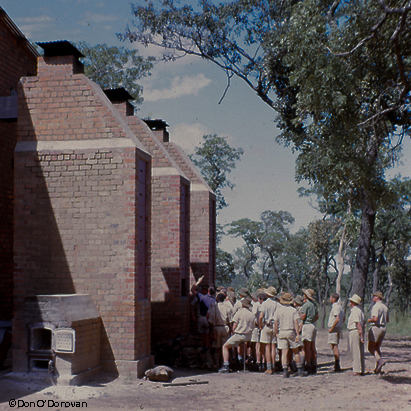 Charles Howard (also known as Nature Boy) and his Mozambique Spitting Cobra as told by Ward Martin (Course 14).
Mashaba Mills and I were always independently late for lectures, for some unknown reason. One afternoon we were heading down to the lecture hall when Nature Boy (Naitch), who should have been at lectures as well, came running up the path towards us, swinging a long snake over his head like a cowboy with a lasso, ‘Turn your heads and don’t look’  he yelled, ‘this is a spitting cobra.’
It seems that the Mozambique Spitting Cobra or M'fezi had the good luck to cross the path just in front of Naitch; probably the only guy amongst us who wouldn’t have killed it out of hand. Naitch had dropped his lecture stuff and scrambled into the bush after the cobra. He had just grabbed it by the tail and pulled it out when we came along.
He ran up to the car park and popped the snake into the boot of his car and then came charging back to lectures. After the classes we went back with him to see what he was going to do with it. But he couldn’t find the snake. There were no tracks in the dust under where the car was parked so it hadn’t escaped and we assumed that nobody had been there to steal it, so the snake must still be inside the car.
It is a bit disconcerting to lose a spitting cobra in your car, especially when you are planning to go to town to take your chick out that evening. Eventually Naitch sat back in despair, leaned back in his driver’s seat and looked up. There, in the padding of the roof, was a little bulge, quite a large little bulge, and a relieved Naitch cut a slit in his roof padding and retrieved his snake, which he put in a box to take to the snake park and flog for pocket money.


Pete Drummond (C16) about Keith Mills (Course 14).
Keith was my boss at Farmers Co-op Stockfeeds, Salisbury, and taught me a huge amount of valuable and useful knowledge on how to become a good advisor to farmers. Keith was in charge of all the reps at Farmers Co-op who were all Gwebi graduates. Dave Moss C16 and Tim Lewis C12 were part of that team. We always met at the Meikles downstairs pub on Friday afternoon to conclude our weekly performance and drank many beers to celebrate our successes.
We became close family friends and particularly Lindsey and Libby as well. Keith and Libby moved to Port Elizabeth where he continued doing the same work consulting with farmers and advising them on animal nutrition. When Keith passed away quite young, we met Libby in PE when we were all there for the world windsurfing competition. Our kids became friends and when Peter James and Shane went the next year to PE Technicon they continued visiting the Mills family.


Initiation by Ward Martin (Course 14)
At Gwebi we spent half the week doing practicals and three days a week at lectures.
Tea break at lectures comprised an army style catering urn with sweetened milky tea and tin mugs to drink it from, delivered to a wooden table under a huge Msasa tree near the single lecture hall. At one of our first tea breaks things got a little out of hand and the tea cups somehow became missiles and we all went back into lectures dripping a little bit from tea splashes. Next day we got the tea but they forgot to bring the cups, which made the tea hard to drink. When somebody complained to Stan Hodierne the Hostel Manager, he said they did not forget to bring the cups, but if we were going to treat government property like that, they were no longer going to supply us with cups.
So that afternoon some of the guys went to town and raided the waste bins at a garage to collect the empty oil tins. They did some brazing practice during the engineering practical, so that next week we could drink tea again. Some of those oil tins with tin handles brazed onto them were works of art.
So on the first day of lectures the following week we were drinking our tea, criticizing the other guy’s cups, when the seniors all arrived to visit us, presumably also to criticize our cups. To a man they declined to join us in a cuppa and when tea time was nearly over ‘Fatty’ (now called Paul) Taylor, one of the most enthusiastic of the initiators, instructed a couple of our guys to empty the tea urn out onto the ground. The selected guys were a bit reluctant to tip the tea urn, thinking that if we did such a thing Hodierne may also take our tea away and we then would not need our nice new cups anymore.
But Paul was insistent, cracking his cattle whip to emphasise his wish for us to empty out the urn. So a couple of the guys took it to the side of the tea area and tipped it. The contents splashed out at first and then started making plopping sounds. We all watched, fascinated as the tea ran out, leaving a large pile of meaty looking spheres with strings of sinewy stuff attached. The seniors were rolling around laughing and gradually Paul got control of himself and sputtered “So how did you guys enjoy your tea? Your pig ball tea?”
That’s how we found out that another Gwebi tradition was to keep a litter of piglets until initiation and then perform the castrations on the males when the time was ripe for the first year’s tea break. The seniors went on their way, looking like they had really enjoyed the joke and we drifted back into lectures, most of us looking a little green around the gills.
It certainly seemed to me that this farming caper was not for sissies and I was starting to have doubts as to the quality of the senses of humour displayed by some of these farmers. The following year when our turn came with C15 for some reason there was no litter of piglets for us to castrate, so their initiation was not quite as much fun as ours had been.