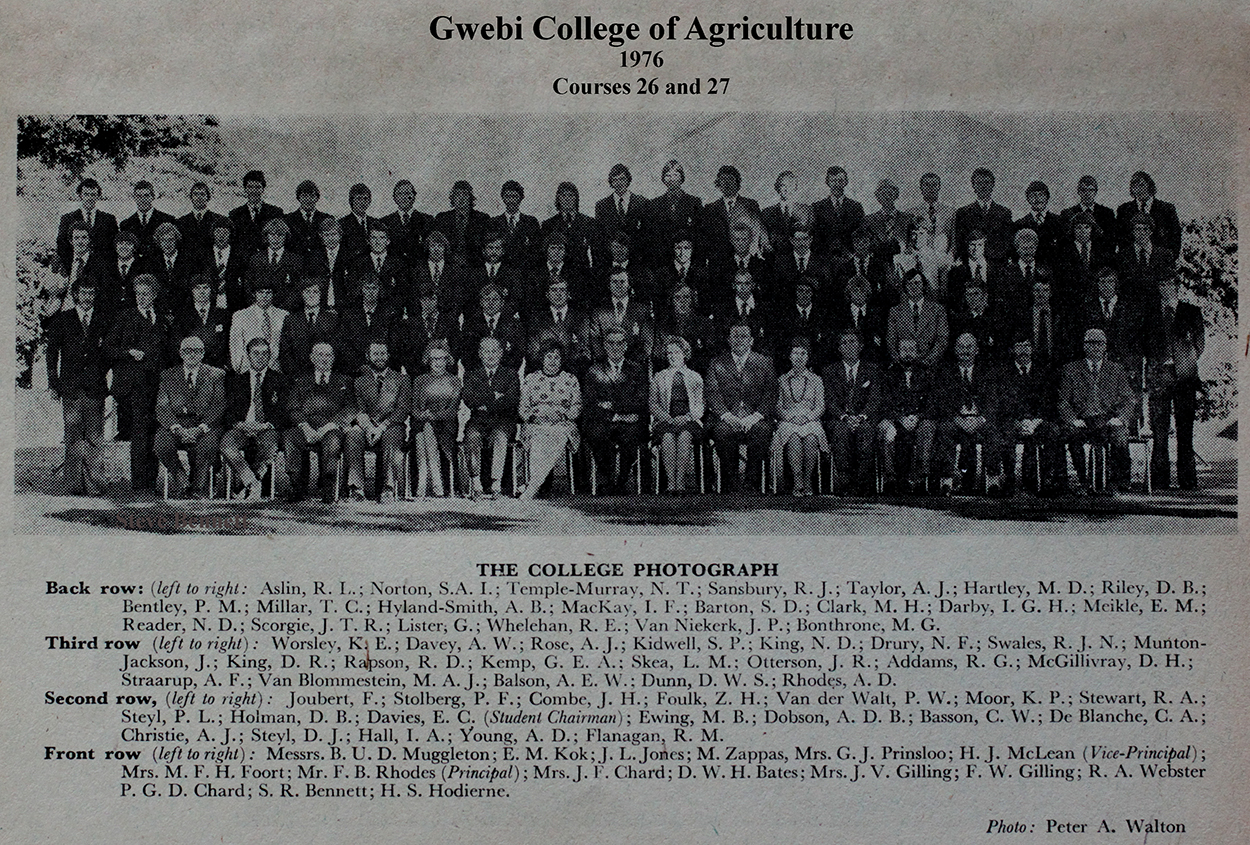 Alan Balson “Tagat” Course 27.
Prior to Gwebi, I did my pre-Gwebi with P J Nel of Waterfalls Farm in Zambia.
He was an amazing farmer and possibly the best person to learn from as a role model. He was Course 15 and was sadly killed in a plane crash in RSA in 1996, way too young.
Once I left Gwebi, I went to work for the Ottersons in Chipinga.
It was interesting in the fact that they did all the work on the farm themselves and had no other workers or labour whatsoever, except for someone around the house and garden. So I learned a lot there as they had a large cattle farm, and the three of us did all the work - Jamie, Geoffrey and myself.
I enjoyed my time with them immensely, and learned so much, especially how to really live. I got to be quite good on a horse.
I left to do my National Service as I was from Zambia.
I went to School of Infantry, Gwelo, and passed out of Intake 161 as best all round Cadet, and got the Commandant's Award. Incidentally, I was there with Mark Hellam, whom enrolled later with Course 30 at Gwebi.
I was posted to 1(Indep) Coy RAR, and 2i/c was there was Lt Neill Jackson from Course 25. I ended up in Support Commando, RLI as OC Anti-Tank Troop but we all know how it ended. Thoroughly disgusted, I left the country, despite a lot of friends telling me it was going to be fine, and joined my family in Papua New Guinea.
I worked for Illimo ‘iLLimo’ Farm, where it was a learning experience of the highest degree. Everyone chewed betel nut, and were so relaxed, nothing mattered.
We did chickens... (haha Rhomil Shield) breeders and broilers, pigs, cattle, market gardening, sorghum and crocodiles. They had a hatchery and a feed mill for the intensive livestock, with a pellet press.
The good thing was that it was so warm there that we hardly had to heat up the tallow to put it in the mill.
This was a bizarre country to go to after Rhodesia!
Everyone was happy, and the lowest worker would just call you by name, no matter who you were.
I think Illimo Farm had a gang of about 300 workers at the main intensive Farm and about 100 workers at the grain Farm.
I learned how to organize like never before.
There were a few incidents there that would be memorable for anyone, but a couple stand out - here is one.
One morning I went to line, where usually everyone waited for their tasks for the day, and there was no one there, except an old man with a crutch.
I asked the "trainee" manager, whom I was coaching, "Where is everyone today? Can't do much with the gang of workers."
Possibly the most astounding answer ever "The village (Pinu) has gone Wallaby hunting!" Of course they did... Everyone... Apparently, once a year the whole village upped and went wallaby hunting for 5 days, and then took the weekend to smoke and sort out the meat, and have a huge party.
I tried to explain that this is not how farming works, but to no avail.
The whole of Illimo was managed by Australian expatriates, who were on par with Gwebi at parties!
Anyway I was sent inland to learn how to plant and manage Palm Oil production, as the farm wanted to venture into that.
I was amazed at the pay at Illimo, I got $800 a month, but in Rhodesia, while at Gwebi, I got $200 a month working at the sharp end in Mtepatepa for Pat Taffs doing Cotton and Tobacco, and we used to supply all the farm stores in the district. Mrs. Taffs ran that business.
Anyway, after a year at Illimo Farm, I called it quits, and went to visit my girlfriend in Canada. We were married within 3 months.
I got a job as a feed salesman for intensive livestock, with a Feed Mill and got offered a job on a chicken broiler and also broiler breeder operation.
Here in Canada, it was a good job as I the experience from working for the Ottersons, as you do everything yourself.
I worked there until 1986, and then was offered a partnership to run a Broiler and Broiler breeder farm for another farmer, as a 50/50 owner.
At Gwebi Mr Chard said we always have to have a goal, and try to stick to it. The one he mentioned was specifically this: "Own a farm by the time you are 30".
I did, just a few months short of my 30th birthday, in 1986.
We added Turkeys with another farm in 1988, and sold one farm in 1993.
One of the Nielsen twins visited us on our farm in Beiseker, Alberta, and so did Robbie Kroeger, both were from Course 28.
We sold our farm in 2006, and I went into the Alberta Oilpatch as a consultant on reclamation and remediation of oil well sites and this was a never ending project.
My wife retired from Real Estate in 2011, and I retired from the oil and gas industry in December 2021.
We have three children and 5 grand-children. We live in an unassuming bungalow in Beiseker, Alberta (pop 780).
We are enjoying retirement, and look forward to travelling again once everything opens up.

David McGillivray (Course 27).
David spent 14 years in Malaysia and Singapore in a number of stipendiary roles. 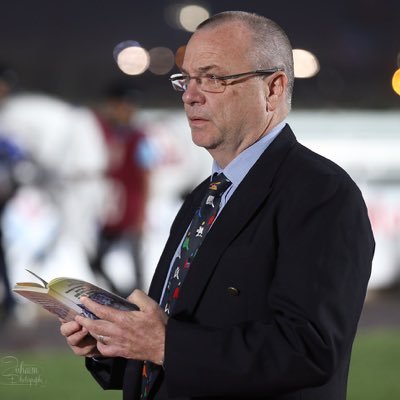 On Tuesday, January 20th, 2009, the Malayan Racing Association reported that the chief stipendiary steward of Malaysia, David McGillivray, was attacked by two men in a carpark in Ipoh.
He was slashed with a machete by two men on a motorcycle, inflicting a deep cut on his left forearm.
This was followed with 11 years in South Africa with the National Horseriding Authority which included spells as Chairman of both the Central Provinces and the Western Cape Stipendiary Boards.
In 2013 he was appointed Racing Control Executive.
Presently residing in Malaysia, David is Chief Steward at Qatar Racing & Equestrian Club.