Other students that were integral members of Course 12 include:
J.K. Atkins. Passed away from cancer
"Harrow” Bednall from the UK.
Colin Bray was a successful farmer from Tengwe.
J.C. Sweetman.

Update from Tim Landsberg, Course 12.
One of the best periods of my life was my time at Gwebi.  In my view the training there was as good as you would get in the world and Rhodesian agriculture, as well as the 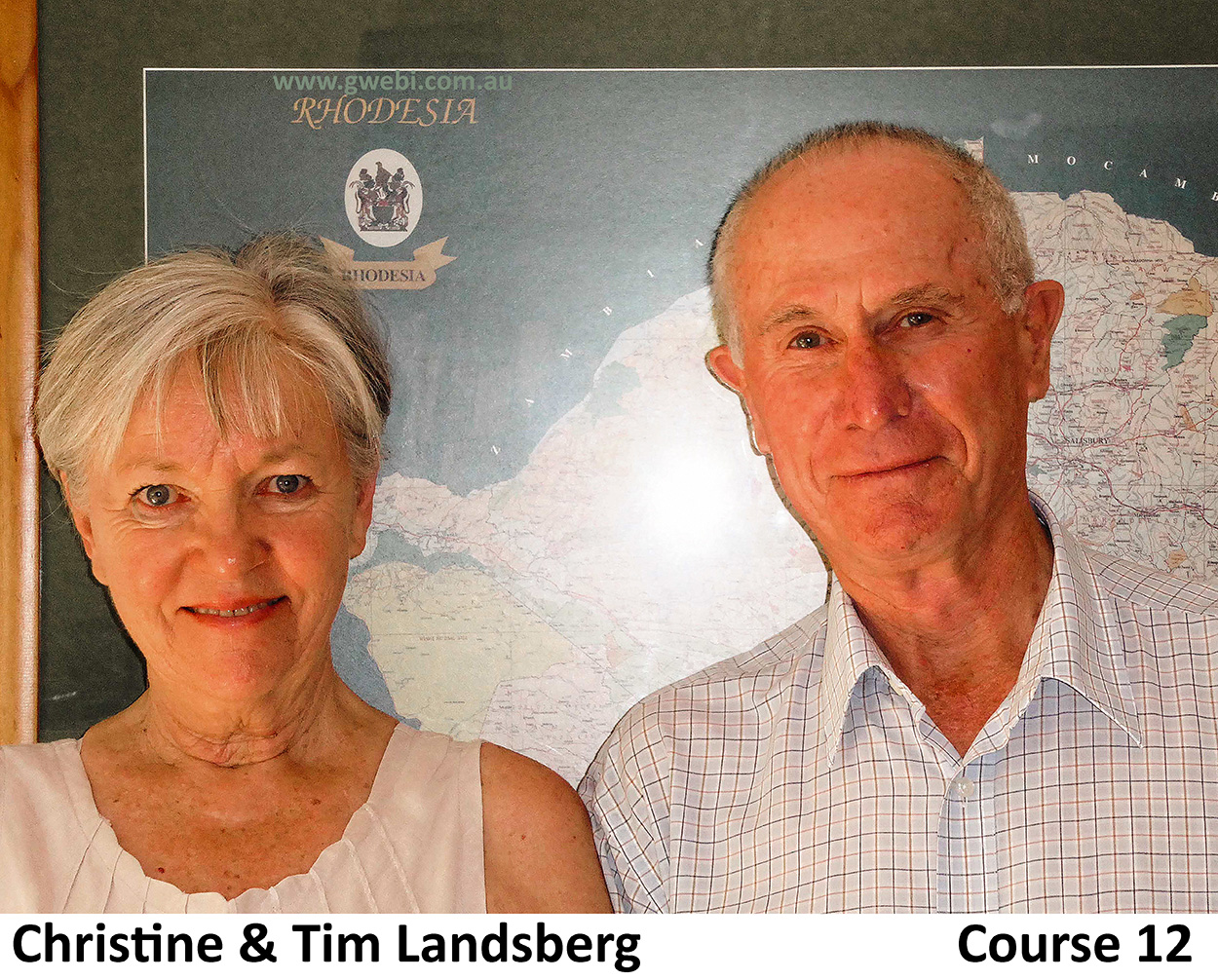 infrastructure of the country upon which agriculture depended, was second to none. That must be correct because if it was not that small country would not have made the remarkable achievements that it did in agriculture. The massive exports of tobacco, maize and  cotton,  to name just a few of the major ones, were extraordinary. It was due of course to the people, and for me it was a privilege to work with them.
When I left Gwebi I spent a few years working on cotton and tobacco, at Gatooma Research Station and the Tobacco Research Board. I then did an MBA at Cape Town University and was offered a job by Shell, in Johannesburg, which was a good experience and led to me being offered a job by an American multi-national, FMC Corporation. That led to spending several years based in Greece. Greece was the base because it provided access to most of Africa, for which I was responsible (except for South Africa). So I travelled to just about every corner of Africa, which got to be pretty testing! My wonderful wife Christine stoically put up with it all. I was transferred back to Johannesburg to run Southern Africa and after a number of years there we found ourselves in Australia, in 1986, where I was Managing Director for FMC and responsible for Australia and South East Asia. In the early 1990’s I finally left FMC and basically spent the rest of my working life managing major projects, most commonly related to the food industry (FMC was a major supplier of food processing equipment and I had been responsible for managing the supply, installation of upgrading of a variety of big capital equipment.) The last big project was the upgrade of a huge abattoir at Rockhampton, Queensland; I eventually gave that away because by then I had really had enough of the inside of aeroplanes.
Christine and I have three sons who speak with broad Oz accents, three Australian daughters in law and four beautiful grandchildren. We have lived in Melbourne since we found ourselves in Oz, and I guess that after being here for over 25 years we are settled. Christine may argue with that because I continue to indulge my passion for African wildlife and wildlife photography by being back in South Africa, Zimbabwe or, occasionally, Zambia as much as I can. I am back a minimum of once a year and often as much as 3 times a year. More than that and Christine has some stern words with me. Each year in September I take part in a wonderful activity at Mana Pools, some 300 km below Kariba. Mana Pools is still shown on the maps as a flood plain, but Kariba effectively ended its life as a flood plain. As a result the Mana Pools wildlife is changing and the annual activity is to monitor what is happening. I have had the great good fortune to visit many Southern African game areas and am always seeking others, but they are seriously expensive these days! I will never stop looking for more!
I play golf regularly off a 14 handicap, ride bicycles and do what I am told when there are grandchildren to be minded or bits of house to be fixed. We have a rugged 4x4 and have driven over big areas in Oz, such as up to Cape York, across the Simpson Desert and up to the Golf. Christine and I consider ourselves very fortunate indeed and one particular point is of great satisfaction, and that is the number of people who need a bed for 1 to many nights on their visit to Melbourne, or passing through on their way to somewhere else. So please note, anyone who should read this, that our house is open. If we are not here, the backdoor will be open,  towels are in the cupboard and beer in the fridge (no Castle or Lion.) Thanks to Colin Lowe for contacting me and I was delighted to hear from Kim Hodierne. He used to ride past our house on a bicycle which had a steering wheel in place of handlebars.  And Stan? RIP, he was a remarkable man.
As written for Colin Lowe.